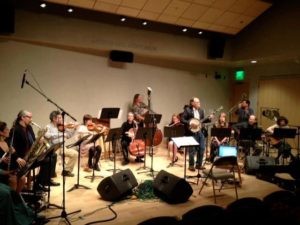 November 22, 7:30 pm and November 24, 2 pm, 2019
The Taming, premiere of an opera with libretto by Brian Clay Luedloff, music by Paul Elwood, based on Shakespeare’s Taming of the Shrew, with a less misogynistic ending. The University of Northern Colorado, Campus Commons.

May 25, 2019, time TBA
Premiere of SAFERNOC for mezzo soprano Alice Simmons and violinist Tamasin Coates, St. Katharine’s Church, Savernake, Marlborough, SN8 3BG, UK. The program focuses on trees and forests with other compositions such as John Dowland’s “O Sweet Wood” (with mezzo and banjo), and Handel’s “Here Among the Shady Woods. “Safernoc,” the old-English spelling of Savernake Forest, is a three movement song cycle about the forest.

March 23, 2019, 2 pm and 7:30 pm
Premiere of two scenes from THE TAMING, an opera-in-progress with librettist Brian Luedloff (the full opera to be premiered November 22 and 24), at the University of Northern Colorado. Scenes at the UCCC, Greeley, Colorado.

November 30, 2018
Premiere of “Colorful Colorado and the Apparition of Virgil” by the University of Northern Colorado Uncommon Ensemble under the direction of Anne Lanzilotti. A graphic score created on a 1976 road map of Colorado, the players are free to interpret the composition in a variety of ways.

October 10, 2018
Premiere of Lulu of the Plains, for mezzo-soprano, chamber ensemble, electronics, video, and dance. The Roxy, Wichita, Kansas. The composition is an abstract homage to silent film star Louise Brooks, who spent several years of her adolescence in Wichita.

November 20-24, 2017
Chulalangkorn University, Bangkok, Thailand. Lectures on Wednesday, November 22 and 23 featuring a couple of works for banjo and electronics.

September 25, 2017
The University of Akron, DARK WOOD for solo snare drum performed by Joseph van Hassel at The Noble Snare Festival. The Nobel Snare is an anthology of works for snare drum published by Smith Publications.